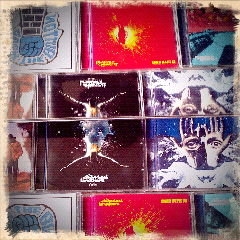 If you love the Chemical Brothers music you'll love this film.

If you want to be immersed 90mins of Chemical Brothers 'block rockin beats' sounds, vocals, images and artistry then you'll love this film.
In December I wanted to see it.

When the limited cinema locations were announced 'Metrocentre Odeon, 10pm' I was disappointed - The Gate would have been more convenient for me, and I could have made more of a night of it. Mr Lisa wasn't keen, "if you sort it out, I'll go" so I sorted it.

There was about 60 or so in the audience, no pre-show adverts, just a warning to Tweet at #dontthinkmovie and check in with FourSquare and comment in the event page in Facebook, and a warning that there would be strobe lights throughout.


And there was light.
This light was so bright.
This light was awesome.
In front of us danced images of horses, spoons, falling forks, knives, camera flashes, haunting clowns, marching robots, butterflies, people, colours and shapes.
Our eyes were wide.
We saw everything.
Vivid, huge and hypnotizing.
We could not turn away.
We could not not look.
We were there.
And the music wormed into our ears.
It penetrated our heads.
It flowed through our veins.
And with each beat our bodies twitched.
Controlled by the music -
We were there.
It was a wondrous sight.
It was a wondrous sound.
It was our religion.
This was not a film.
This was not a sit and watch show.
This was an experience.
Sitting still was not an option.

It began with toe tapping, and nodding in appreciation (Yeh, i know this track) and as the tracks were mixed, mashed and spun, the toe tapping and nodding became sit-down dancing, arm waving and spontaneous clapping.
Someone climbed onto a barrier in the cinema and danced, and we cheered...

By the end of the film the space in front of the screen was now a dancefloor, shadows were cast by people dancing at the back, and the people in the middle were going for it with arm waving and whooping.

The Chemical Brothers finished their set and we collectively cheered for an encore, for that time we were the audience in the festival...we were there, at that festival, part of that show, and it was amazing.
It has to be one of the best (& surreal) cinema experiences of my life.