I had high expectations for their second album, bought it for Carl for Christmas (released in Jan11 - so he had to wait) and I also bought him gig tickets for last week (so he had to wait for that and he had to invite me). We've had a couple of listens since getting it, and it continues to impress me after each listen, they've only released a couple of tracks from the new album, so I was wondering how full will it be?  It was sold out.

Their stage was set up with so many lights, up in the rigs, set up at the back of the stage: floodlights, spots, everything - this was going to be a show and a half!

They opened with tracks from To Lose My Life, to warm the crowd and played old favourties mixed with those from the new album, Rituals.

They finished with 'Bigger than Us' which has already been released from the new album, and the crowd knew it off by heart.

They always seem really genuine, like they've never expected this kind of following, Harry McVeigh always thanks the crowd, sings to the crowd and puts real meaning and feeling in his performance, thumping on his chest for impact.  At the end of the show he leads the band to the front of the stage, and receive their applaud as a band, I've been to so many gigs where the band thank the audience and bugger off.

White Lies are a great band with an intense unique sound, lyrically & musically.

If you haven't heard them, give them a wizz on youtube, try out Death, Fairwell to the Fairground, Strangers and Bigger Than Us for a start.  Wikipedia describe them as "White Lies' musical style has been described as dark yet uplifting by the media, drawing comparisons to Joy Division, Editors and Interpol."
Posted by Lisa (aka Loopygirl) at 09:57 No comments:

Thanks to my friend Kate who gave me this recipe, after she cooked it for me a few years ago.

Ingredients:
This recipe will do a 7-8inch pie dish 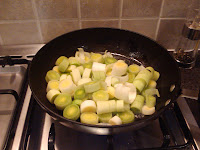 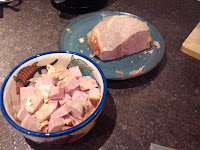 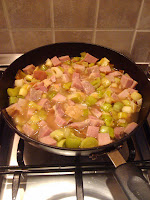 Pastry:
Whichever pastry you choose you need 2 thirds for the base and 1 third for the lid.
Put it all together: 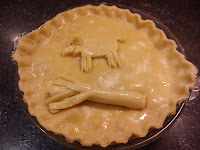 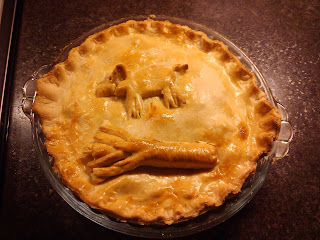