I normally do a cake for Carl's birthday & asked what he wanted me to bake, he asked for a Victoria sponge with fresh cream and raspberries. Yeh, that's a simple cake for a cakesmith like me, no problem...
The cakes were baked earlier in the week and were a bit of a disaster really, first I realised that I didn't have any vanilla essence, so had to use vanilla seeds, scraped from the pod. Then when the timer went off, I just took them put of the oven, and didn't really pay attention to them. When I did notice them, it was because they had sunken middle, and they'd not cooked enough in the middle.
I thought that I could still 'improvise' by cutting the centre out & filling it with fresh raspberries, and it would look like it was intentional.
Then when I began glueing the layers with homemade raspberry jam I ran out (of jam). I searched the pantry and dining room cupboard for jam, it turned out I really didn't have any left (lots of chutney and lots of strawberry jam). I literally scraped by, and eventually glued all the layers together with an even layer of jam.
One thing that did work was the cream: double cream whisked with a tablespoon of icing sugar, fresh raspberries and then spread all over the cake.
It looks garishly pink but tastes wonderfully raspberry-ey, you wouldn't know that it began as a mistake, would you? 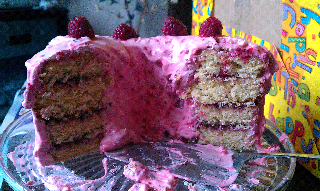 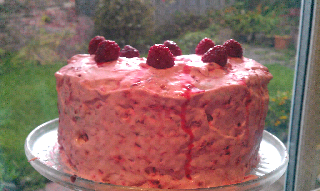 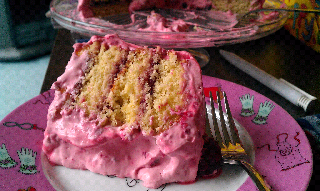