The weather was good, Carl wasn't aching from the bike ride yesterday so we agreed to split up: Carl was going off with some bike and I was going off shopping to Richmond. Deal.

I dropped Carl off at The Dales Mountain Biking Centre and left him to it.

Grinton to Richmond was a 10 mile drive, I parked on the market square and had 2 hours to shop before I had to move the car.

I began at York House, a shop which you could literally lose yourself in, it was a mish-mash of objects ranging from antiques, and old stuff, quirky 'homeware' gifts,  handbags, jewellery local art.  It's the shop that I get steered away from with Mr Lisa.  If you were to put all of the Tynemouth market stalls (Saturday & Sunday) into a shop - this is what you'd get.  I must have spent a good 40 minutes in there, and bought a matryoshka moneybox -only this only had 1 layer, a purse covered in felt flowers (which I'm going to remove the flowers and use on a top), a packet of lexicon cards and 10 cigarette cards.  A bizarre combination of stuff, but I have ideas in mind...

The next shop along from York House (or there abouts) was a great little deli called Jeffersons their window had a map of the region which pin pointed the items they stocked and where they came from - a great idea!  Part of my mission today was to return to the ranch with Yorkshire Tapas, a selection of cheeses and nibbles so that we could stay in the cabin for dinner, and save a few pennies.  I decided to re-visit them later on my rounds.

By this time I was hungry, so called in at Cross View Tearooms, and had a really great sandwich, one I'll recreate back home: Wensleydale, Apple, Walnuts, Mayonnaise and Mango Chutney.  They all worked so nicely, crunchy and tarty yet sweet and creamy, it was very delicious.  And the lovely lady in there who served me also lent me her pen, as I was also trying to do some Clandestine Cake Club homework.

Time was running out on the free parking, so I went back to Jeffersons and got 4 local cheeses, a great Apricot chutney (as recommended by the owners), a big slice of cheese (coverdale) and onion quiche, some crackers, some gorgeous thick-cut ham and a free tub of pease pudding (lucky Mr Lisa - I'm not a fan).  I also bought a nice seeded loaf from Peters Bakery in the town too. 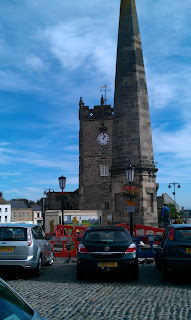 Revisiting an old friend...
Next stop - some photos down by the river Swale, and the waterfalls, followed by a 10 minute walk to Cornforth Hill. Why? Cornforth is my maiden name, and about 25yrs ago I had my picture taken next to the sign by friends on a day trip.  The sign's looking old now - you can hardly make it out, but it does say CORNFORTH HILL.

Other pics of Richmond...

I didn't have afternoon tea in Richmond, I actually saved myself for more cake at The Dales Mountain Biking Centre - and went for coffee cake, with coffee.  I arrived back there for about 3pm, Mr Lisa had been back from his ride only 10 minutes earlier - he'd had fun


We nipped over to Reeth, for an ice-cream (yes we'd only just eaten cake) and had a suprise visit from the Air Ambulance, which landed in a field just behind us.

Eye spy a tree or two of sloes
On our Sunday walk around Redmire, we found a large collection of sloes and decided that we'd take ourselves a small bag and make our own sloe gin and call it Redmire Sloe Gin.  So at dusk we headed out to pick sloes, had a stop off at The Bolton Arms in the village and went back to the cabin for our local dinner. 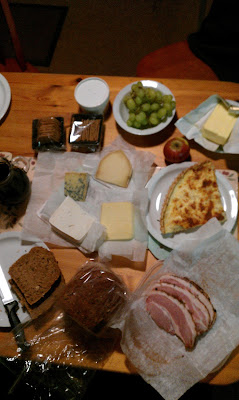 Dinner was a pick & mix menu of local produce, cheeses, bread, ham, flan - mostly from Jeffersons of Richmond and wine (the only thing that wasn't local) - a tasty selection of yumminess.