As it's nearly Halloween I thought I'd blog about the fancy dress costume I made for Panic Room 2013. 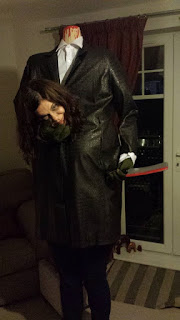 I decided I wanted to make myself look headless (like this costume I made in 2010) but without it giving me a stiff neck .

I began by making a paper maché neck and shoulders: I created the shoulders by wrapping a pillow in a bag, wrapping it with brown tape to create a sausage. Then for the neck I taped a plastic plant pot to the top and then just covered it in paper maché (flour & water paste and strips of newspaper). I let it dry and put another layer on.

When it was completely dry (it took over a week) I removed the pillow, this was now my fake neck and shoulders.  Next it needed painting skin colour, and a then some bloody detail on the neck, so it looked like it had been hacked off.

My original plan was to re-use the red dress from the previous outfit, but there wasn't enough material in it to work.

So I googled "headless fancy dress costume images" and found my inspiration.

I trawled the local charity shops (there's an abundance in Whitley Bay) and found a big sized (XXL), long, leather-look coat and knew it would work, but I needed to find a way to mount the shoulders so that it looked realistic.

My structural engineer helped with this, the shoulders were attached to a wooden frame and the wooden frame slotted into a rucksack, the rucksack was zipped up to secure it in place. The coat was put on, over the rucksack so the headless part was wearing the coat (not me).

As I needed to see where I was going, I wanted to created the illusion that my head had been cut off and the headless person (Edward as I had nicknamed him) was holding their own severed head.

I had to work out where my head would come through the button fastening and how to create fake arms positioned to look like they we're holding my head.

The button fastening was easy, having Mr Lisa really helped as he could mark where I needed to stitch the coat/remove buttons.

For the arms I created fake arms using  screwed up newspaper wrapped in tin foil, tin foil is great for moulding, it's lightweight and holds it's shape, I secured the positions (slightly bend) by wrapping them up with brown tape. I created hands by repeating the process and stuffing them into a pair of old gloves and attached the hands to the arms and wrapped it all up in brown tape again, stuffed the arm into an old shirt and did the same with the other side. Then I "dressed" the shoulder and neck piece with the shirt, and the shirt in the coat, positioned and secured the head-holding-arm to the coat and it was done.

I messed up my hair, put ghoulish make-up on and just wore a vest top underneath (it was pretty warm in there) jeans and boots and I was done.

Edward won  2nd prize in the competition and he now lives in my loft. He's available for weddings funerals & bar mitzvahs

A few weeks ago i fell over, in slow motion. I was walking to the supermarket pushing my sleeping baby when I seemed to trip, fall to my knees, tip the pushchair, land on my knees and keep hold of the pushchair (I was going downhill).

A few cars slowed down, but drove off when they saw I was okay. I bloody wasn't, I was shaken.

My jeans we're torn at the knees and I was shaken, I got the the bottom of the hill and got my phone out and spoke to a friendly voice (Carl).

I bought the bits from the shop, ignoring my ripped jeans (it's probably fashionable) and aching knees.

I got home and inspected my injuries: a nackered pair of jeans, a bruised right knee,  bit bloody scrape on the left knee (complete with bruise) and a bumped ego. I got a cuddle for being brave and a plaster.

Now my knee has scabbed over nicely, I've been very good in *not* picking it, despite it coming away at the edges and saying "pick me pick me". I love picking scabs. But I'm trying to let this one fall off on its own, without any help from me, "no i didnt pick it, it just fell off in my hand" ;-)

If you don't like scabs, then don't look at this picture. 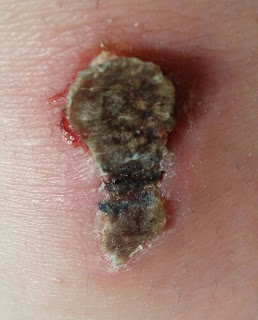 On the same night I also dreamt

That someone stole my greenhouse. An 8x6' greenhouse: frame, glass, clips, shelves, all the pots inside. They just left the concrete base. Fuckers. I was speechless.

Last night I dreamt I was...

When driving home today I burst into song, which came out of nowhere:

We used to sing this song on bus trips, and I don't think I've sang this for at least 10 years.

My name in a pancake 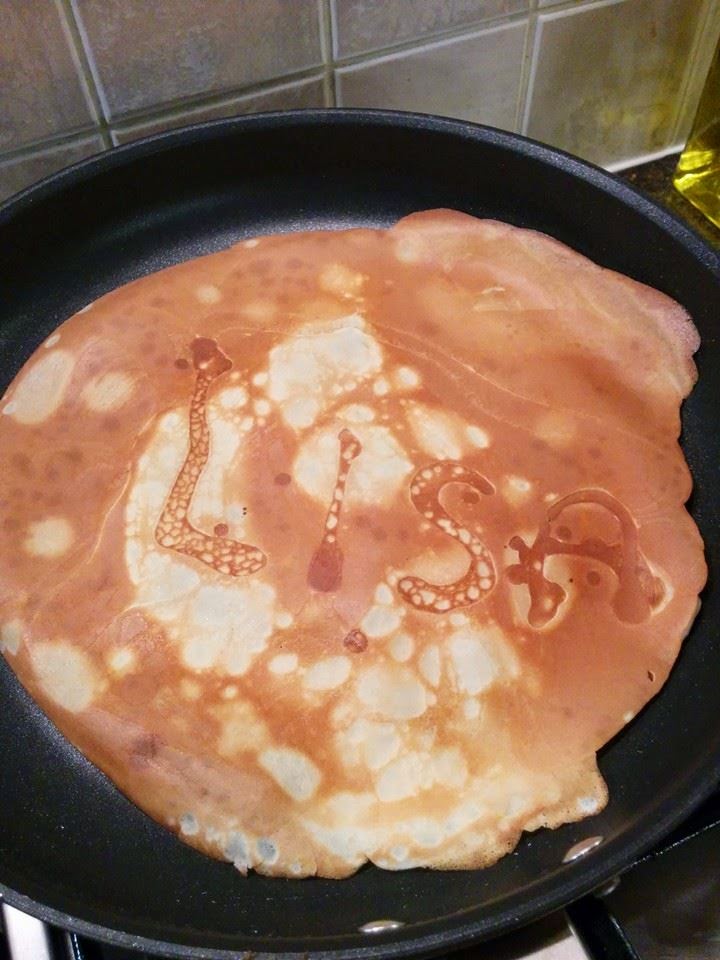 So it was shrove Tuesday this week and we had pancakes at our house, I had 3 and in my third pancake I wrote my name in the batter (piped from a piping bag) cooked it a bit and poured in the rest.

If I'd known how good it turned out I would have written messages or taken facebook requests...