Although I've not been posting regularly about my allotment, I've still got my allotment and am still 'doing' it.

Being pregnant is no excuse (for me) to stop, I'm fit and well, the baby is active and well and because I was digging/weeding/picking/planting/sowing before I became pregnant then it's perfectly safe for me to continue (I'm still spinning & walking up/down the escalator).

For the early part of the pregnancy (until about 18wks) I haven't really had to do anything differently.

As my bump has grown I've had to listen to my body, and adjust things accordingly.

Before 18wks:
I'd dig a patch of ground with a fork, turn it over, bend over and pick the weeds out, non-stop until it was done.

Now:
I dig a patch of ground with a fork, I squat down and pick the weeds out (wearing gloves) and if I feel the (normal) gentle muscle/ligament stretch across the lower part of my belly I'd slow down or sit down for 5mins with a drink.

Generally my weeding/sowing/planting position has changed, mainly because bending from the waist squishes my (growing) belly and soon causes that muscle/ligament pain.

So I'm mostly on my hands and knees (kneeling on a knee pad) using a handtool and wearing gloves to pick/remove weeds, or squatting.

There are some things I can't squat down for, like picking peas, picking climbing french beans, filling the watering cans and digging potato plants but I'm just *careful* about how vigorously I do these and I listen to my body.

My allotment still isn't perfect and I know it never will be, but it's keeping me active and when I have dinner and see that all of the veg is homegrown I feel proud.

Once some of the decisions had been made I cracked on with the towers - I'd decided that using dowels would be too tricky, they'd need to line up perfectly, no room for mistakes and the cake would be stacked in layers, which wouldn't be very strong and a wobble in the car might cause cracks, so then I thought about making the towers portable - taking the base, transporting the towers and putting them on at the venue, but that meant that the towers would have to fit perfectly and we'd still be hoping that they wouldn't topple over on the day and the decoration on the towers might come off if the towers were laid on their side in the moving car.

Then I wondered about swiss rolls, making swiss rolls.  I've made them before - but they're never even and they always unravel - they're tasty enough and easy-ish to make, but I couldn't commit to doing 8 perfect ones and the cake in the base too, but that didn't stop me thinking that shop-bought swiss rolls might be a better, more structurally sound alternative.

I began with mini-rolls 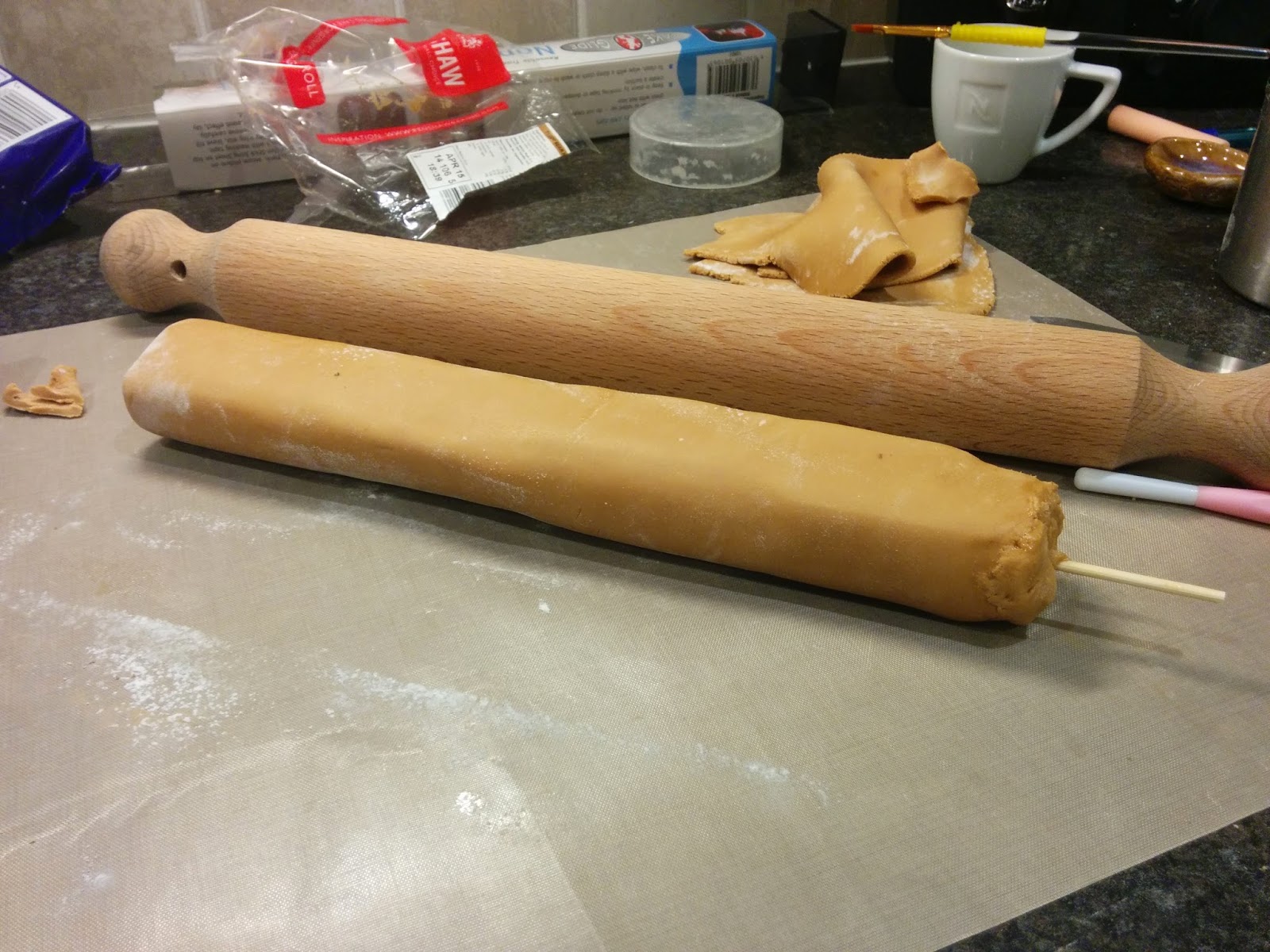 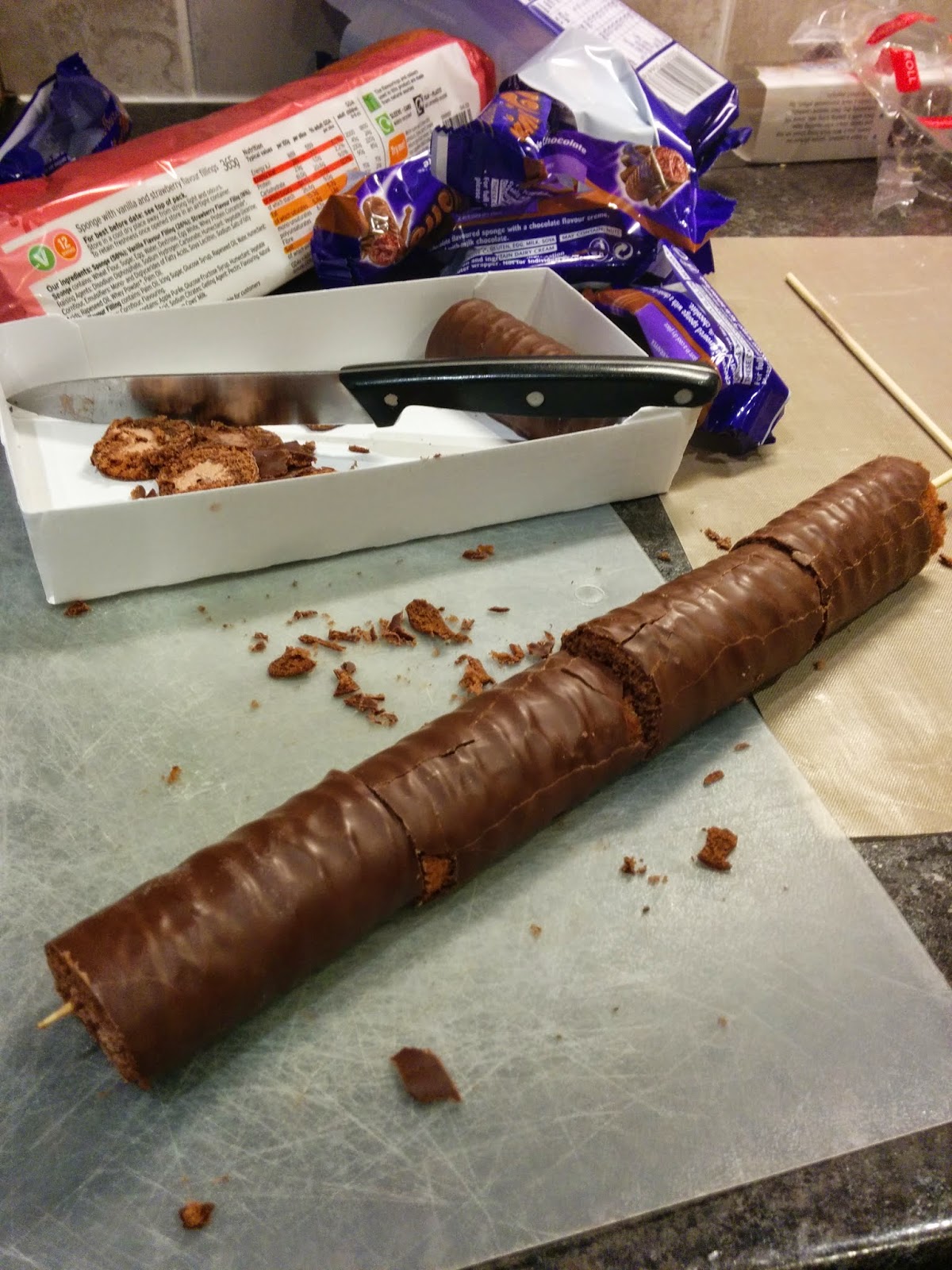 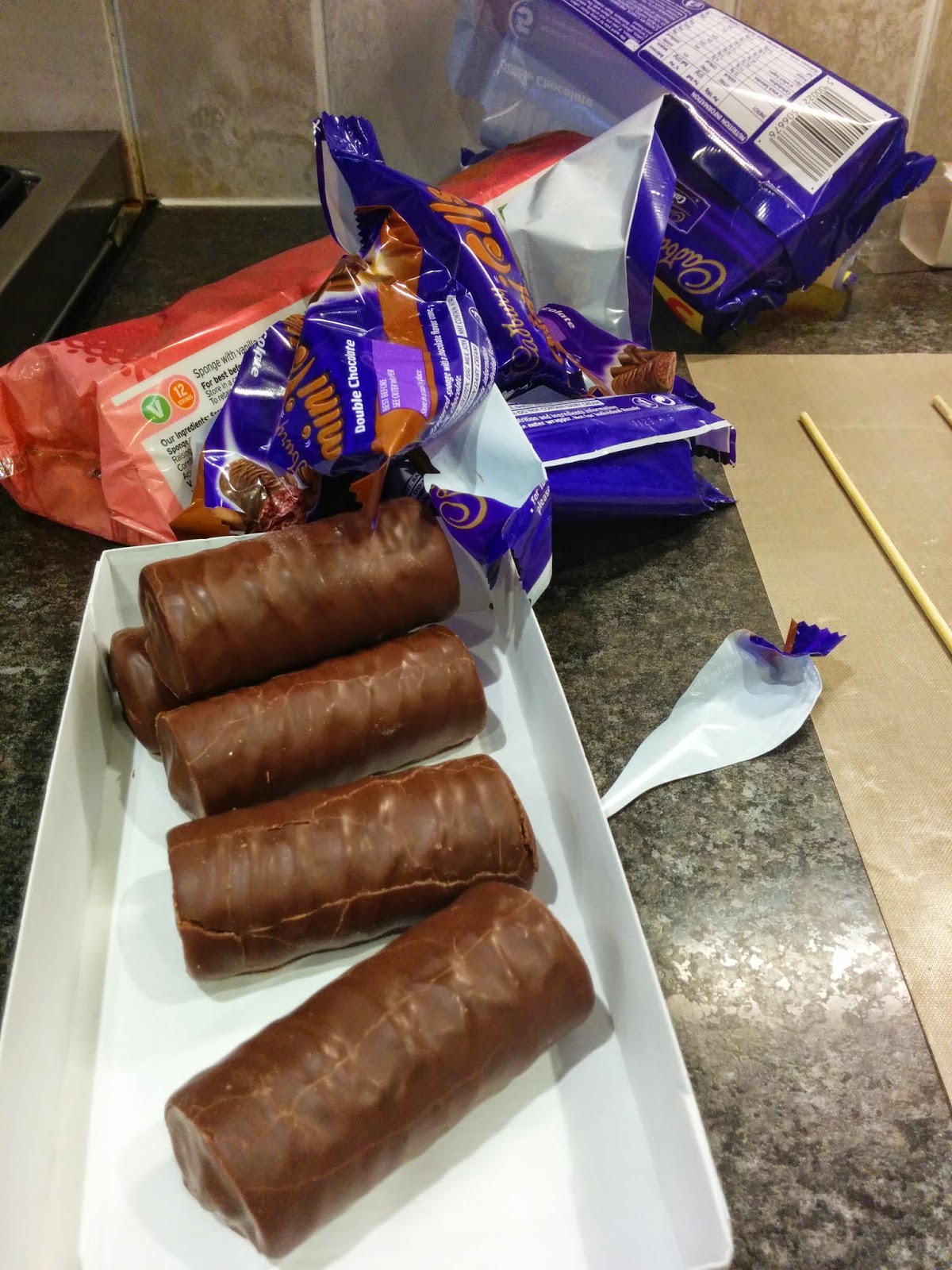 I tried mini-rolls first of all, I skewered 4 together and wrapped them in icing.  It was a pain to do because the chocolate kept droping off the mini-roll and then when I'd finished wrapping it in icing I realised that I should have covered the mini-rolls in buttercream first (to help the icing stick).

Another problem with the mini-roll was that the joins between mini rolls weren't strong enough, so as soon as the skewer was removed I'd get cracks....I decided that mini-rolls were not the cake to use here, so I unwrapped them and ate (some) of them. 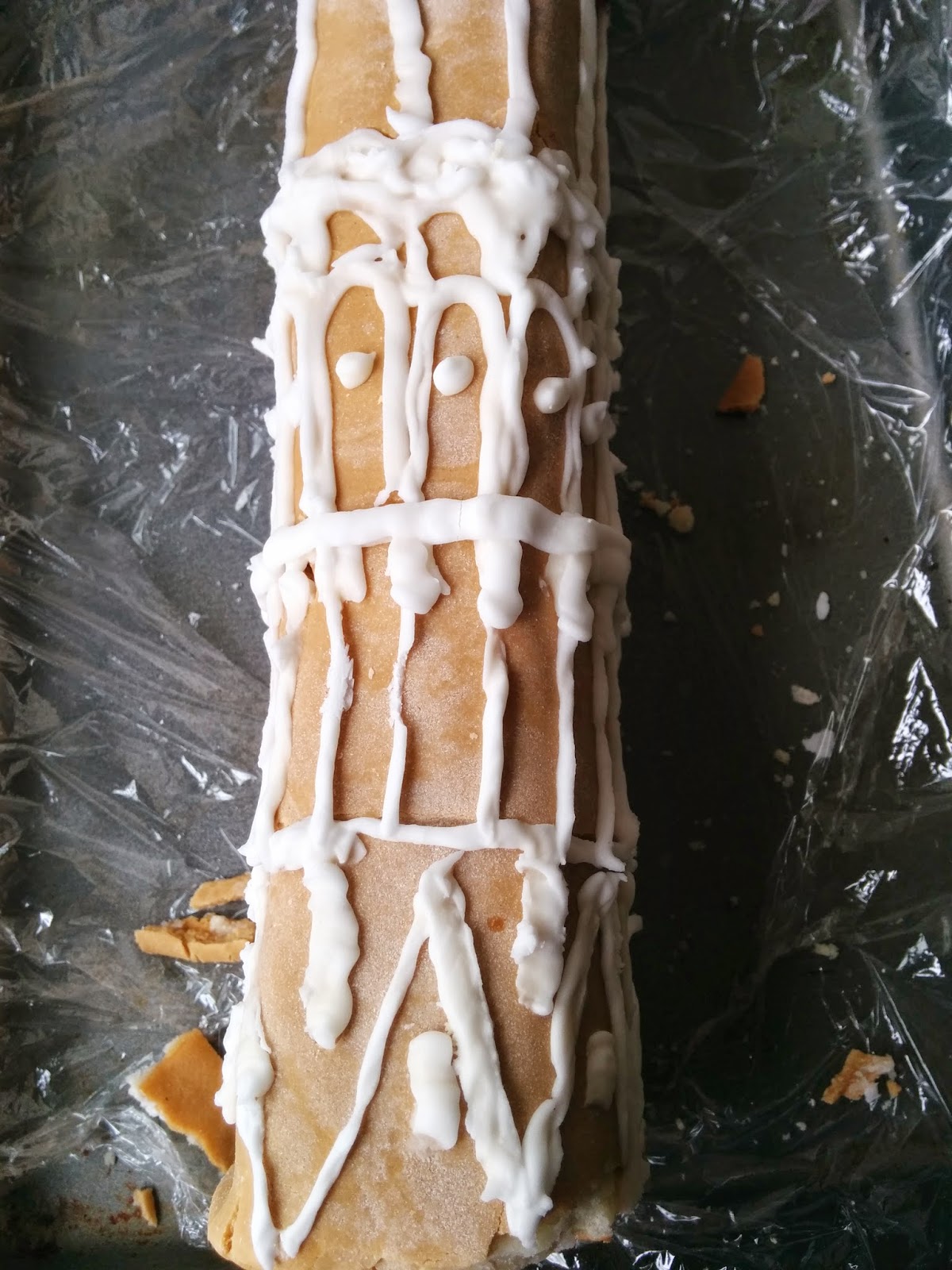 So I moved onto swiss rolls, the family sized ones - 15inches (ish) long and 2 1/2 inches (ish) wide - these were much better, with a longer roll lightly buttercreamed and covered in icing there were no joins and I didn't need to have a skewer in it either.  I made one and left it to harden, which helped it even more.  I also thought that I could try a bit of piped royal icing too, just to see what my current efforts were like - pretty rubbish I can tell you.  And that was whilst the tower was laid flat, I needed to get the hang of piping on a vertical surface...

I told myself that I still had enough time (about 3weeks) to practice my royal icing skills, and used youtube and help/tips from my friend Cake Poppins.  I also found out that you could buy a piping nozzle which had more that one hole in it, so rather than stuggle to pipe 1 line at a time I could do 2, 3 or even 4 lines, if i bought the nozzles, which I did!! 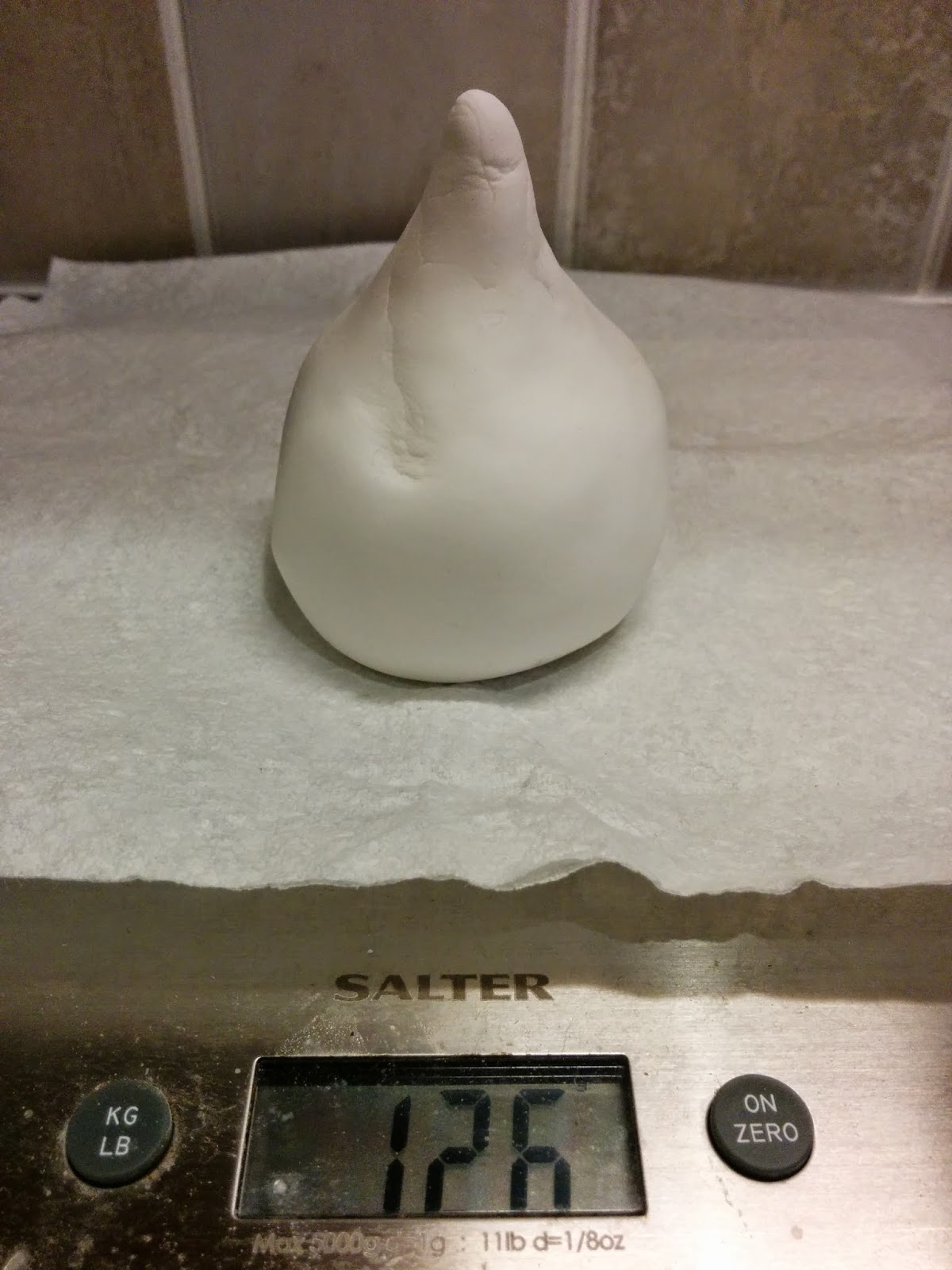 St Basil's Cathedral has 8 towers, each tower has a dome, 4 small and 4 large domes - we needed something that could be put on the tower that was fairly lightweight and that we could decorate.

Fondant icing & Flower paste (like fondant but sets ROCK HARD) - easy to mould and get the basic shape, sets hard but felt it might be too heavy. 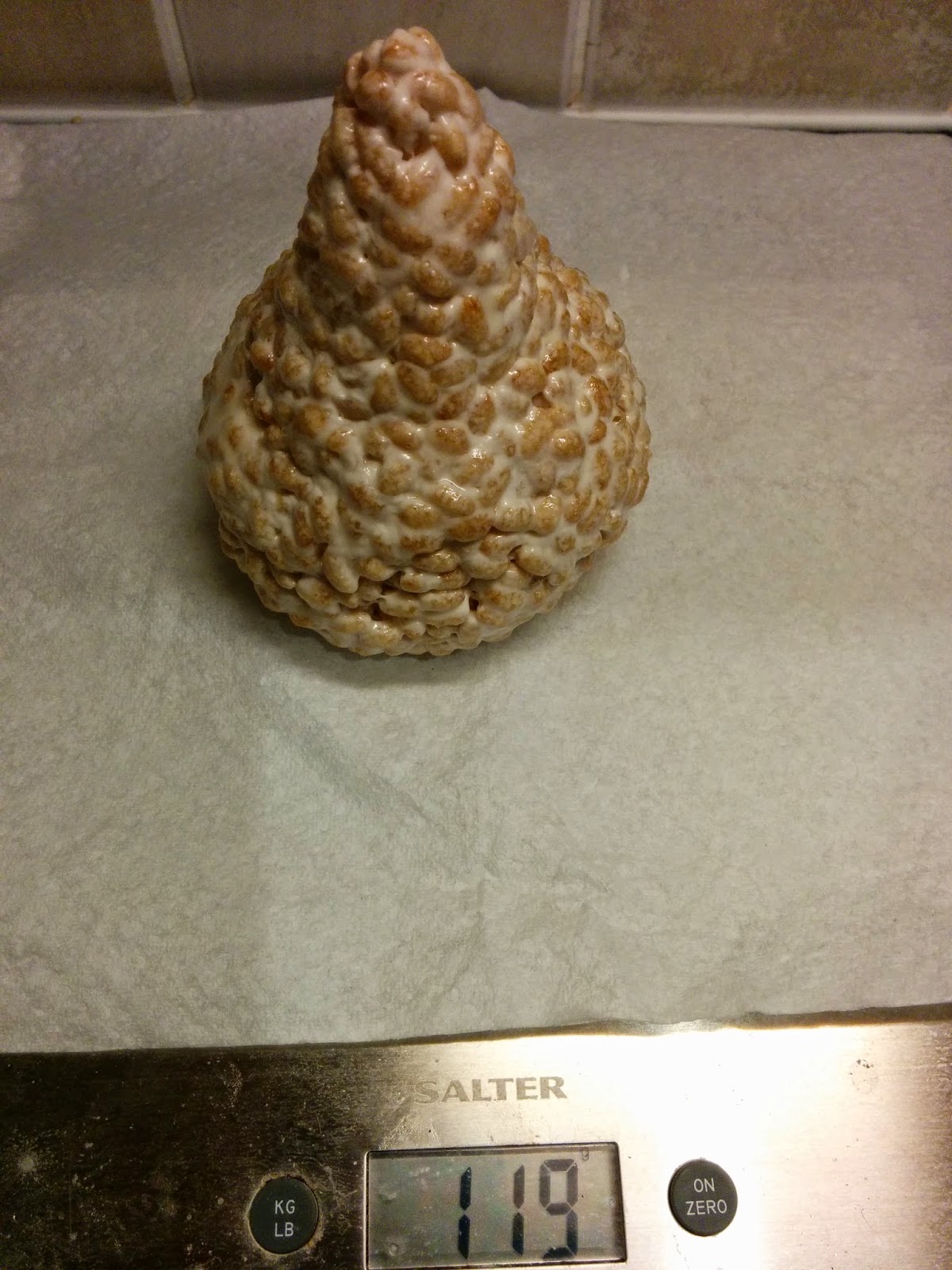 rice crispies & marshmallows (a friend at work told us how good they are for creating shapes/moulding/scuplting.  I found a recipe that was quick and simple and and had a go....Woahhhhhh, how sticky does the mixture get!!! My hands were covered in a sticky mess.  So washed them, put on latex gloves and tried again, woahhhh still too sticky, so I tried again with the gloves but coated my hands in olive oil - much better - but I wouldn't want to eat it after that.  I got a good enough shape and it set pretty hard but it really is a pain in the backside to handle, and and still probably a bit too heavy.

We also considered the option of using the dome made from icing - covering it in clingfilm and covering it in rice crispy/marshmallow goo - but it didn't seem to work so well.

Then with about a week to go we decided that we'd see whether a cakepop might work...What's a cakepop? Ask my good friend Kate who runs CakePoppins holds classes and she'll actually teach you how to make cake pops - small bitesize cakes (cake crumbs & buttercream) on sticks covered in chocolate and decorated up - if you're too lazy to learn you can always buy some from her - and they are bloody delicious too. 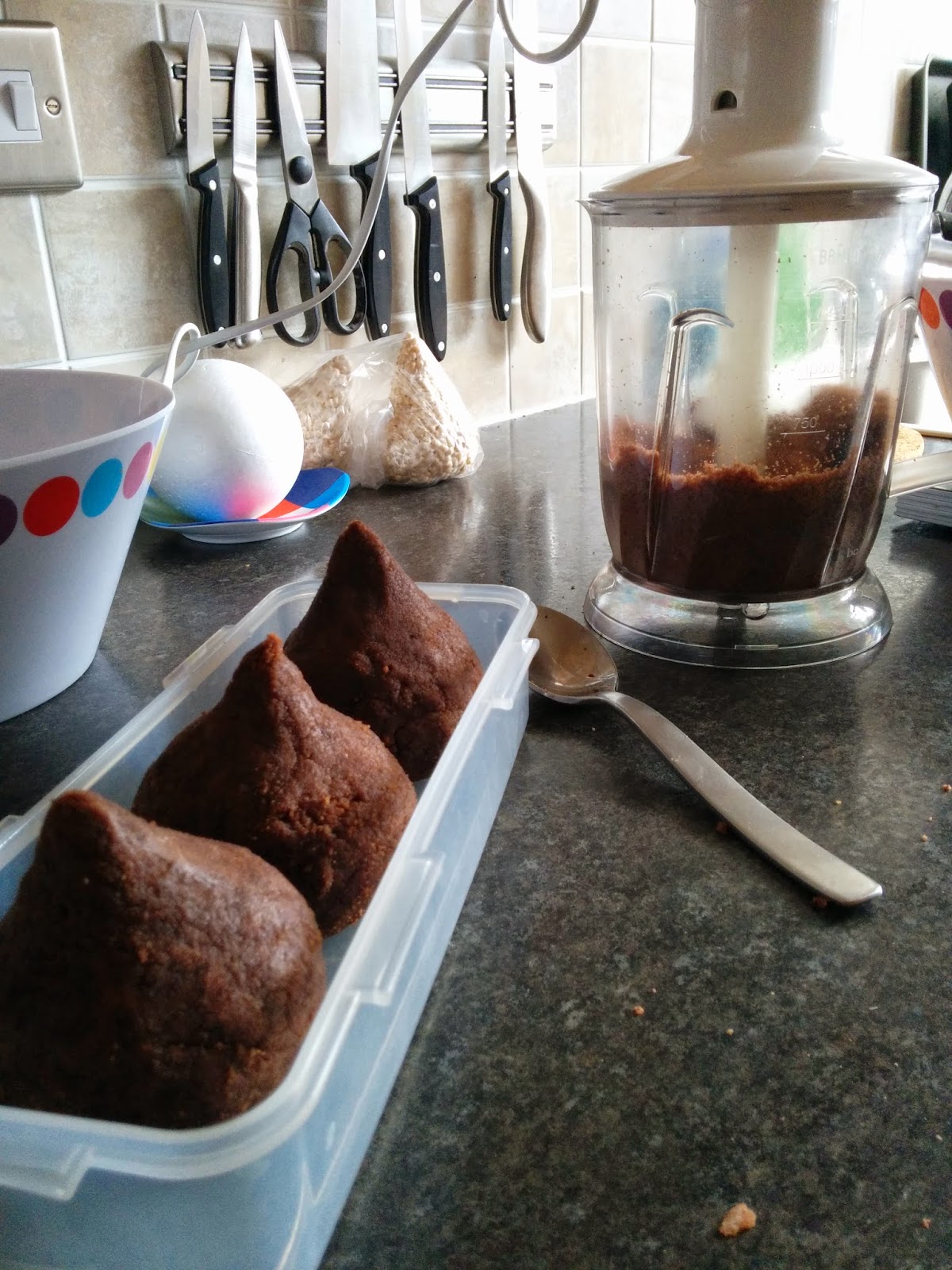 A cakepop is a small thing like the size of a golf ball - I don't think that it's recommended that you do anything larger because the weight of the thing wouldn't hold to the stick, but we were desperate and we weren't putting it on a stick, it was more to sit on a flat tower, so we gave it a go.  We decided that we'd make a batch and if it failed miserably at least we'd have something nice to eat.

So we made up some mixture, made one (at the size we wanted) weighed it, and then made the rest exactly the same weight.  Chilled them in the freezer for a bit and melted some chocolate.

We decided that dipping the cakepop in the chocolate might not be ideal as we didn't want to fill the white chocolate with brown chocolatey crumbs, so we took the messiest option of pouring the chocolate on top of each cakepop.

As you can see - it was best to cover the worktop in greaseproof and have something that the cakepops could drip through, I admit that they weren't very evenly covered, but we decided that we'd coat them in coloured fondant icing anyway so you wouldn't see the bumpy lumpy bits.  And the beauty of cakepops is that once they're covered in chocolate they'll keep really well (for about 10days) if they're in a cool spot (cupboard/fridge).

You can paint the chocolate, but we didn't have time to experiment with that...

Also, you may notice that there are 5 small domes in the picture below, we did enough for one small spare (knowing that it would be ours to gobble after the event - as I said, cakepops are delicious!!) 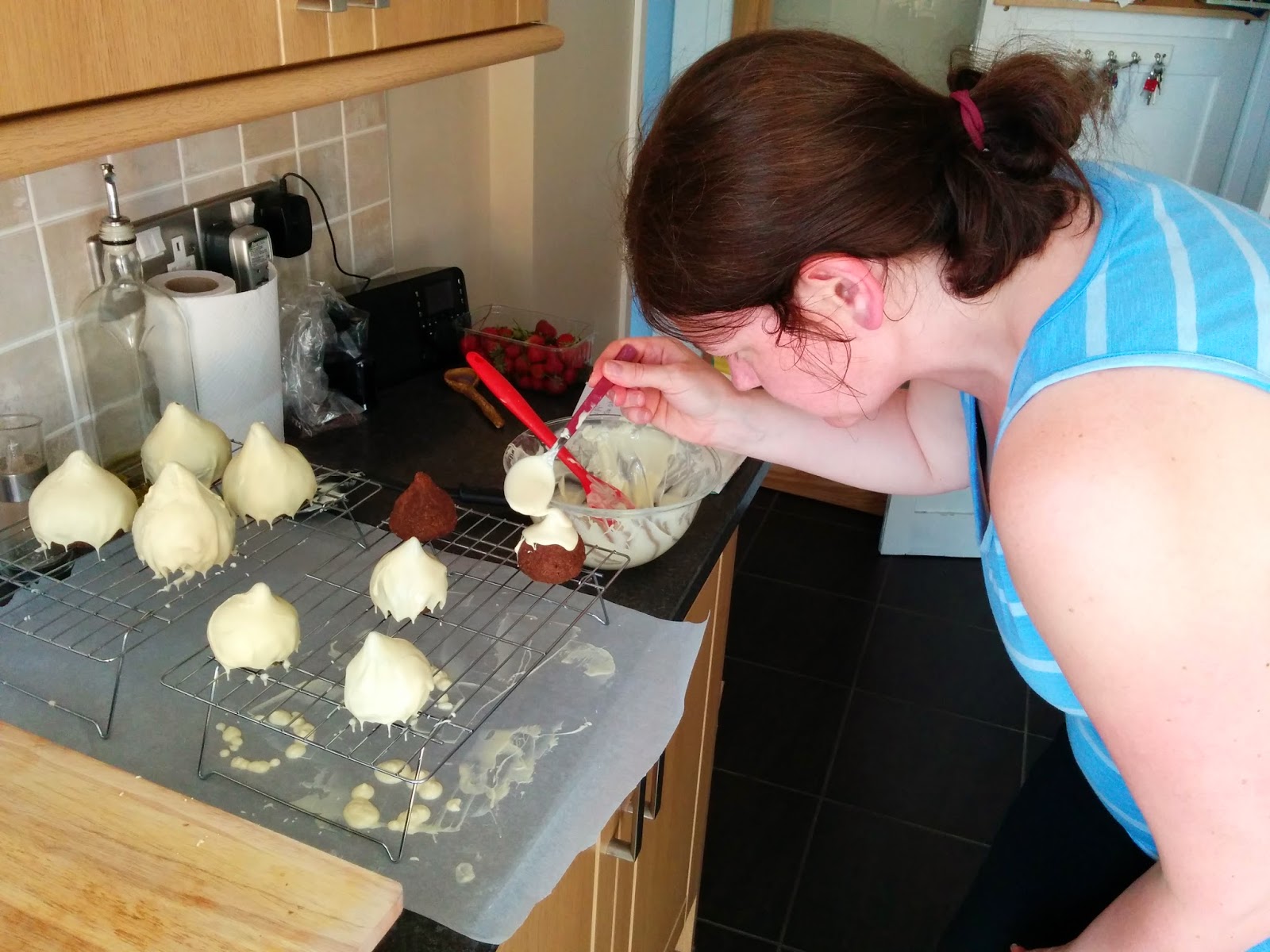 So we decided that cakepops were the way to go, they were probably even heavier than the icing and the marshmallow things, but we'd reached a point where we just decided to stick with this and keep everything crossed that they wouldn't cause any leaning/damage to the towers.  Plus they would be transported and added to the cake in situ.

Mr Lisa was very concerned.  He took on the burden of "Engineer" as he always does, even without volunteering.  His role was to find all of the tricky bits in the original building and work out how to make them work (stand upright without any assistance: cardboard boxes, batons, skewers) using the medium of cake - he's a purist and passionate about it too. If you're building a building out of cake it should be entirely made from cake, none of this cheating with boxes covered in icing...He likes the challenge, and by removing the amount of cake essentially removes the challenge for him.  And even though we have serious discussions about how busy we both are, we actually really enjoy the planning, experimentation and the actual building process.

And we had a few challenges to deal with:
My thoughts were taken up with ideas about what shortcuts and decorations I'd like to try, and googline for "St Basil's Catherdal cake" - there are quite a few results, which was good, because it told me that it was possible! 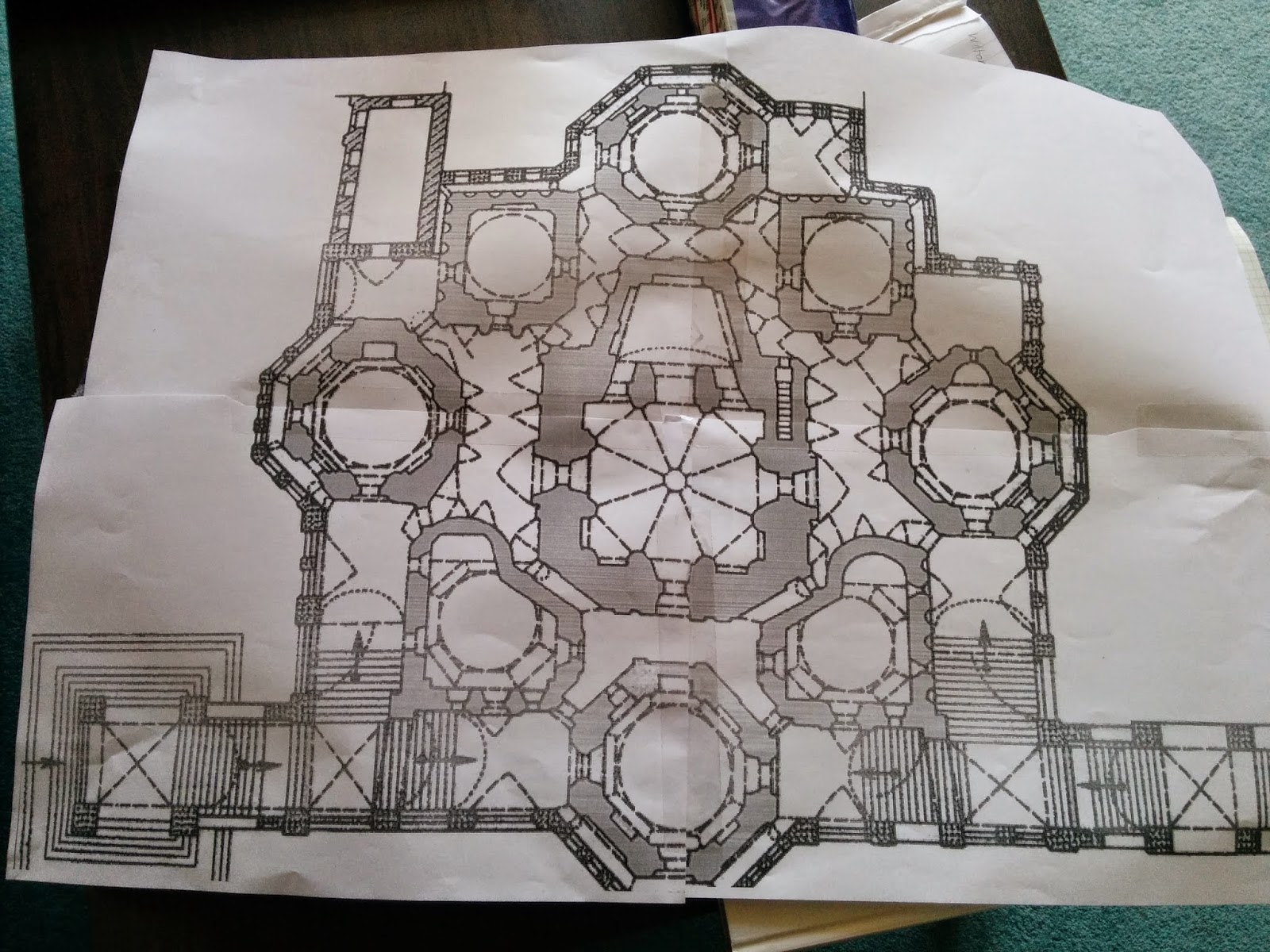 I wanted to get started on experiments, on practicing piping royal icing into pretty patterns, on baking cakes (to freeze) on trying to create a lightweight dome rather than deciding how big to make the beast.

We found "St Basil's Cathedral" floorplan was very useful too - helping us to work out the shapes and size.  Mr Lisa was able to do some photocopying/enlarging and selotape it together to produce our blueprint (actual size floor and side views).

And then I could experiment!!

As an aside, before I tell this story I like to note that Basil is Lisa spelt backwards with a "b" at the start.  I didn't realise it at the time when I choose to build St Basil's Cathedral, but my unconscious mind may have helped the selection....

This story is broken into smaller bite size chunks which makes for easier reading...

Earlier in the year I got an email about Cakebook 2014, pitched as Cake Planet - cake-buildings from across the world...Soon after a list was circulated of buildings on offer...Soon after that I seemed to find myself replying with a "yeh, I'll do it - put me down for St Basil's Cathedral" and then June crept up before I knew it.
Posted by Lisa (aka Loopygirl) at 20:03 No comments: