Last night I dreamt I was on flight to Miami

Anyway, I was on this flight and realised that the flight attendant was Lyns, a lass we knew, she was flying with her fiance Phil & her little boy Matthew. They were going for a little bit for a holiday. And out of nowhere, I found a toy for the kid to play with, a telephone on wheels (see pic). 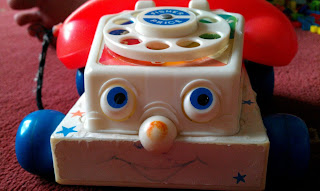 Then it turned out that rock band Muse were also on the same flight, in the same section of the plane as me. At some point in the flight I ended up crimping card  (a crafting technique that I've never done before) with Chris from Muse. I don't know if he was into card crimping, but he seemed to know what he was doing.

Then later in the dream, probably another dream, my friend Lynne was getting an outdoor kitchen installed, I think she was being ripped off, cos it looked just like a shed. And I told her that her shelves would be full of spiders. The other thing I should mention is that Lynne isn't really into her cooking, which made the outdoor kitchen installation all the more silly.