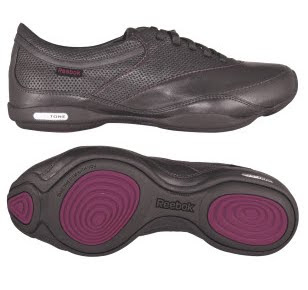 I've had these Reebok Easytone trainers since September 2009, initially I was going to buy some of those MTB shoes but I had a good look at them in Fenwick and John Lewis and decided that they were ugly looking, and ridiculously expensive so I bought the Reebok one's instead.

The Reebok one's aren't pretty either, but they're better looking than the MBT ones, and I can wear them for work.

They claim to tone your bum, hamstrings, calves and abdominal muscles - I've not worn them consistency until this week and I can tell you, my thighs and calves nack - I'm guessing that they're working. The additional ploughing through snow and slush is giving them an extra workout.

I think I might carry on wearing them and see how much I've toned up by the end of the month.
Posted by Lisa (aka Loopygirl) at 20:12