Next week I'm making a Parsnip, Ginger & Lime cake for the Clandestine Cake Club event in Newcastle, based on the 1-of-your-5-a-day theme for the month.  Do I have a recipe in mind? No.
On Friday I spent about 30mins trawling the interweb for a recipe, the nearest I got was for Parsnip & Lemon, which I intend on adapting (replace lemon for lime, and cinnamon for ginger).
However when I went to the supermarket to stock up on ingredients I began considering other (better?) ways to adapt the recipe:
What about using lime marmalade as well as fresh?
I could add glacé ginger, I could add stem ginger (is it the same?) How about adding BOTH?
How do I do the topping? Cream cheese, marscapone, yogurt, water icing drizzle/glaze?
So I decided to experiment.
I have 4 cakes in the oven, taking the original recipe, replacing lemon with lime, cinnamon with ground ginger and then splitting it into 4 bowls, dabbling with the insides, then when cooked & cooled I'll do 4 topping and share them on all 4 cakes.
Poor Mr Lisa has been warned that he's got 16 cakes to sample with me in order to make a decision for the final cake on Wednesday.
I won't blog about the successful cake mix until after Cake Club because it'll spoil the suprise, plus I'd like to see if any CCC members can tell which extra ingredients have been added. 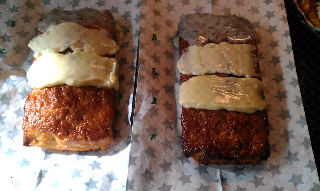