That's quite enough runner beans (thank you very much)

I went to the allotment tonight, the first time since the windy weather we've just had.

My raspberries looked sparse, the wind had blown the living daylights out of them and they looked stalky and pathetic and didn't have half as many fruits on them (or leaves) as last week, and I need raspberries because I've run out of jam.

My runner bean wigwams had fallen over, which actually made it easier to pick them. And rather than battling with them to re-erect them I just picked what was left on them, which was quite a lot (my best crop yet) and they've been washed, trimmed and will go in the freezer with the others.

I think I need some recipes which use runner beans (apart from adding to paella) , as I think I'll get quite bored of just steaming them.  Any recipes will be gratefully received.

I also dug spuds too but they're not in the photo, just because they were in a bucket on the floor, and I couldn't be arsed. 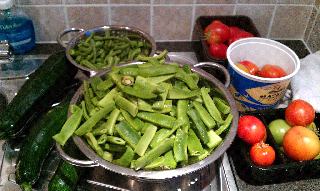