The Gherkin - the big build

After discovering that the cakes had defrosted and squished down on the broom handle we decided that we should trim it, so that it didn't poke out of the top of the cake.

Rather than cutting it, and covering the cake in sawdust, we carefully unscrewed the wooden post (from underneath the board), and Mr Lisa went into the gargage to cut it. I then began replying to someone on twitter when i noticed the cake lean, and again, and again. I put my phone down and grabbed the cake stack.

Mr Lisa came back and we tried to stick the pole back down the pile of cakes and screw it back in.  BUT this didn't work, the clingfilm which was on the pole had slid off into a big pile at the bottom.

We HAD to dismantle the stack (in blocks of 7), slide the clingfilm out, wrap the pole in tin foil (which works so much better than clingfilm), screw the pole on, and restack the cakes.

This took about 20mins, and made me all slightly panicky and worried that we'd nearly lost him (the gherkin). 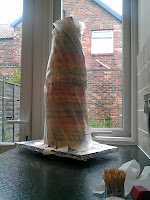 Recreating the twisty windows & icing the cake
The next job was to cut strips of greaseproof, pin them to the cake (with cocktail sticks) recreating that quirky twist.  Once that was done all I had to do was take a piece of greaseproof off and replace with a strip of icing (freshly rolled from the pasta machine).

Mr Lisa laid out the strips and got them twisted around the cake, in the correct formation, overlapping evenly and getting it ready for me to take over with the icing (and so he could go out). 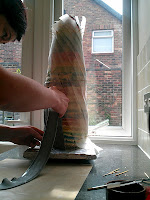 That was fine, the icing through the pasta machine, trimmed to the size of my greaseproof strip worked a treat until about 3/4 of the way round when I realised that there were 16 strips of greaseproof.  I was working to 15, grey-grey-black, grey-grey-black.

So rather than start again (which I could have done,  because I bought far too much icing), I carried on, but made the strips wider.  When I got to the beginning again, I replaced some of the first strips with wider strips. 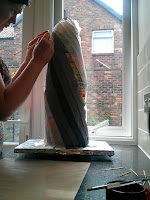 The top-bit was done by Mr Lisa when he came back, I was losing patience with rolling a piece out for the top, cutting the V-shaped notches and getting it to hang, without me making a pigs ear of it, and fortunately Mr Lisa got it to work.

We also noticed that the cakes had sunk even more. 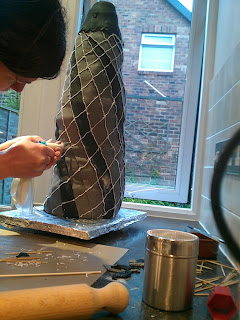 Piping icing
The last bit of the cake involved piping the icing for the diamond windows, in one direction (following the joins of the icing) and then in the other direction, taking the lead from the top of the building and trying to swirl around evenly.  This really showed off my amateurish skills, with my wobbly lines and uneven windows, but to be honest, I loved doing it - it felt so relaxing and I actually heard myself whisper to the cake "I love you" 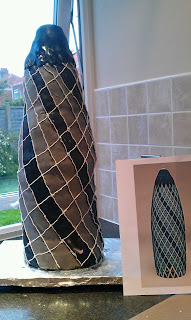 Completed!
Mr Gherkin was completed at around 7pm
I have 4 x 250g of grey icing left and 4x250g of black icing left.

I also had my phone camera set up, taking a photo every minute, I'm trying to find a way of putting them all together into some kind of animated show (I need to ask some geeky people about this first).

It weighs an absolute tonne.
But it is the gherkin!!