I used to pronounce it 'cran-ak-han' but after a trip to Scotland in summer 2010, I was reliably informed that the correct pronunciation was 'crana-hun' 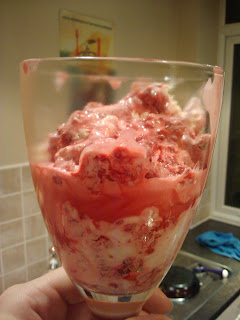 Anyway, if you're like me, and not too hot on whisky you can either leave it out (which is a bit dull) or just put less in.

I know in my picture it all looks a bit pink - that's because I defrosted raspberries for this recipe.  The recipe suggests fresh raspberries because they hold their shape a bit better.
Posted by Lisa (aka Loopygirl) at 18:21