When my friend Claire moved into her new house she decided to have a housewarming party - cool.

She also decided to have a fancy dress housewarming party double-cool.

The theme for her fancy dress housewarming party was Noah's Ark meets The Great Gatsby - Mega-cool.

Mr Lisa doesn't like fancy dress.  And he politely declined the invitation.  But it didn't stop me.  I decided early on that I wanted to be a fox.  A fox dressed in a 1920s dress.  And when everyone turned up I guess the whole scene would look a little bit like a Goldfrapp video, quite surreal and dreamlike...

My costume wouldn't be a quick "buy a mask off ebay" oh no, my outfit was going to be a masterpiece.

I bought a small blank mask from a craftshop and used it as my template, taking inspiration from this YouTube video on 'Making a Masquerade Mask' and using tin foil and papier maché (strips of newspaper coated in flour & water paste) to enlarge the mask with a forehead and ears and a foxy snout.  It took about 2 days to dry and looked great (although it wasn't symmetrical).

I bought ginger fur from First For Fabrics and picked up some offcuts of white fur/fabric from a Made Cafe crafty swap (1st Wed of the month) and glued them on with PVA glue, in fact PVA was fantastic for this project.  I also was surprised about how much fluff would be deposited during this project - I must have hoovered the entire downstairs of the house three times during the project, that fluff gets everywhere!


I folded the ears over a bit, to add character, made a nose from a piece of card which I coloured in black and blackened the eye sockets a bit too. 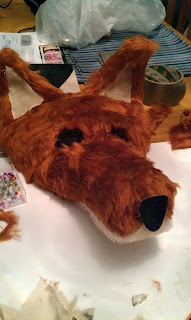 We stripped back some of the material so that we could put the elastic fastening on, Mr Lisa helped with this bit, he drilled through the mask and made 2 holes on the left & right to thread some elastic through, tied the elastic and then we stuck the material back down.  So when it was attached it was held by 2 pieces of elastic on under my hair (below my ear) and the other over my hair and above my ear.
I did consider stitching in some whiskers - a bought some fine leather strips, but decided it didn't need it.

My tail was a strip of the ginger fabric folded in half, with a pointy bit of white fabric at the tip, and I added another ribbon too - to make me look a bit more girly-fox.

The hat was just a piece of card covered in Washi tape and the mesh was from the packaging of a Badminton set from the £1 shop (I bought it just for the mesh), and a piece of ribbon tied in a bow.  It was attached to the mask with a safety pin.

The dress cost £4.99 from a charity shop and some extra sequins were glued to the front to give it a bit of an extra flapper-esque look, the thick white stockings worked well, as did the driving gloves.  I wondered about trying to make my skin the colour of  the fox (without going furry) so I tried out wearing a pair of American Tan tights - my head through the gusset and arms in the leg-holes (they were brand new and clean btw) but we decided that this might look a bit too black & white minstrel, so they came off.

At the party there were some really impressive outfits: badgers, pandas, flamingos, pandas, cats, rabbits - it was so much fun.  I had such a bad hangover!

I loved making my mask and building my outfit - can't wait for the next fancy dress party!
Posted by Lisa (aka Loopygirl) at 21:49