The importance of regulation tissues: for every eventuality

I went camping at the weekend, Thursday evening until Sunday, to Seahouses. Springhill Farm if you're interested, about 1.5 miles from Seahouses town.

Some friends had also booked into the site and we congregated around their tents and campfire each night, talking, joking, drinking and stinking of bonfire smoke.

On Friday night I decided that I was too smokey to go to bed and decided to take a shower, so I went back to my tent, gathered my toilet bag and headed to the showers...

About 5 minutes into the shower something happened. I realised I hadn't brought a towel with me.

What would I do?
I decided to finish my shower and come up with a plan...

What if I sneaked out of the shower cubicle, grabbed some paper towels and dried myself? No, someone might come in and catch me in the buff.

I could just telephone Carl, get him to bring it...No, I realised that I'd left my phone in the tent.

What if I waited for one of the group to use the toilet? I could be waiting all night - best not.

So I thought long and hard and decided that there was only one thing to do, get my trusty packet of regulation tissues* and dry myself with them until I ran out, and after that I would panic.

As soon as the shower stopped I squeezed the water out of my hair and clipped it up, took 2 tissues and patted myself dry until the tissues was sodden, and another 2.

Amazingly I was dry enough to get dressed and return to the campfire. When I got there I recounted my tale of horror, which was met with screams of laughter from of my fellow camping companions - like all good friends would.

*Regulation tissues should be taken everywhere in case of minor mishaps, shortage of toilet roll, sneezing incidents and as proved today, if you forget to take your towel when you go for a shower at a campsite. 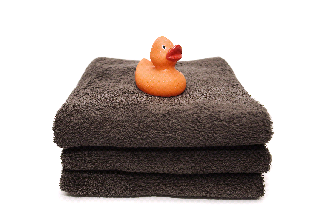 Email ThisBlogThis!Share to TwitterShare to FacebookShare to Pinterest
Labels: friends and family, holidays