This is version2 of rhubarb, raspberry & custard cake.  The top looks a bit messy because I decided that I wanted the top sponge upside down.
This time I made 2 plain sponge cakes, on 1 I slapped a load of frozen summer raspberries (allotment produce) and on the other I slapped a load of roasted rhubard (frozen allotment produce).
The fruit stayed at the top of the cake, and there was a cake layer at the bottom.  When cooked & cooled I just stacked them, rhubarb one on the raspberry one, but I decided I wanted the chit to be together in the middle, so turned the rhubarb one over.
I spread a thin layer of custard between the layers before stacking them.  I had some on top, but decided it didn't look very nice so scraped it off and sprinkled icing sugar over it instead.
Tastes very nice, fruit is sweet, juicy and moist and there's a nice hint of vanilla custard, not too overpowering.  It doesn't look like sick either, which is always good too. 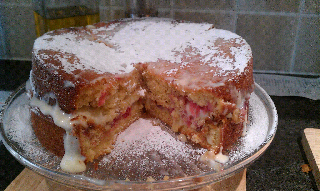 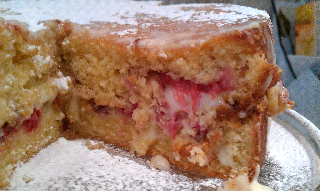